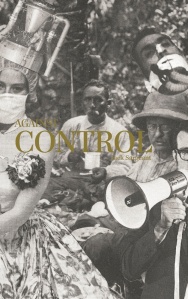 writing my PhD on William S. Burroughs, I once spoke to a Canadian postgraduate who, intrigued by my area of study, ventured to speculate on my methods of research: ‘Burroughs? So what do you do, sit around shoving peyote up your ass?’. Though the hallucinogen was off the mark (when Burroughs first took peyote in 1952, he described it to Allen Ginsberg as ‘God awful stuff’), her question touched on my insecurities regarding the academic study of Burroughs and the Beats. If not consuming peyote through a baffling means of ingestion, shouldn’t one at least respond to Burroughs’ work by experimenting with cut-ups and staring into a homemade dreamachine, than by sweating over peer-reviewed journals in a university library?

Similar questions are brought to mind by Jack Sargeant’s new collection of Burroughs-themed essays, Against Control (published by the Swedish press, Eight Millimetres). Sargeant has written extensively on alternative culture, exploring the further reaches of film history in works like Deathtripping: The Cinema of Transgression and Naked Lens Beat Cinema. The latter traces the connections between the Beats and underground film, and includes a lengthy discussion of Burroughs’ cinematic collaborations. The texts collected in Against Control similarly demonstrate Burroughs’ importance as multimedia icon and testify to the author’s thriving existence beyond the confines of academia, with essays that originally appeared in the high-street publications Fortean Times (‘The Journal of Strange Phenomena’) and The Wire (‘Adventures in Music and Sound’).

Burroughs’ relevance to these two magazines displays the facets of the author that are explored in Against Control and which academia has still to grasp; Burroughs as adventurer beyond the written word, a writer with precise links to magical practices, whose works, as Sargeant emphasises, ‘are not simply speculative texts, but […] instructional guides’. This radical and experimental Burroughs was birthed with the discovery of the cut-up technique in 1959 and through his ensuing years of collaboration with Brion Gysin, Ian Sommerville and Antony Balch. For devotees of this incarnation of the author, the paradigmatic Burroughs books are not Junky or Naked Lunch, but textbooks of ideas such as The Job (its editions from 1974 onwards including the key essays, ‘Invisible Generation’ and ‘Electronic Revolution’) and Burroughs and Gysin’s cut-up manual, The Third Mind.

The area of popular culture over which this particular Burroughs has exerted the strongest influence is identified by Sargeant in his Preface to Against Control, as he explains that his own introduction to the author coincided with a ‘youthful immersion in industrial culture’. The link that Sargeant identifies between the music of ‘industrial culture’ and the ideas of The Job and The Third Mind was originally cemented by V. Vale in his early 1980s series of RE/Search publications, specifically Here to Go: Planet R-101 (Terry Wilson’s collection of interviews with Gysin), RE/Search #4/5 (centred on Burroughs, Gysin and Throbbing Gristle) and RE/Search #6/7: Industrial Culture Handbook. In Against Control, Sargeant emphasises the importance of industrial culture to the areas discussed in his essays: ‘In part it is this understanding of Burroughs that informs many of the readings here, the fascination with Dreamachines, the nature and potential of recorded sound, rituals and the outlaws, all come from the post-punk Burroughs’.

Sargeant’s identification of the ‘post-punk Burroughs’ is a welcome corrective to the dubious ‘Godfather of Punk’ title attached to Burroughs as a result of his éminence grise status in 1970s New York. Despite the Burroughs fans among the more literary-minded names at CBGB (e.g., Patti Smith and Richard Hell), the British post-punk landscape of the late ’70s and early ’80s more fittingly reflects Burroughs’ ideas. Electronics-based groups like Cabaret Voltaire, Throbbing Gristle and Coil directly seized hold of Burroughs’ methods, and took the author’s injunction to ‘cut the prerecordings’ as literally as it was intended.

Representing Burroughs’ influence on the experimental edges of recorded sound, the most valuable text in Sargeant’s collection is ‘The League of Sonic Grey Gentlemen’ (originally published as a ‘primer’ to the Burroughs discography in The Wire). As Sargeant summarises: ‘Burroughs’ recorded work can be divided between tape recorder experiments, recordings of his readings, and collaborations with other musicians providing accompaniment to his readings’. Accordingly, ‘The League of Sonic Grey Gentlemen’ details Burroughs’ spoken word LPs (such as Call Me Burroughs and Dead City Radio) alongside the three compilations of the author’s 1960s tape experiments, Nothing Here Now But the Recordings, Break Through in Grey Room and the 3CD-set Real English Tea Made Here. The latter is an especially authoritative collection, described by Sargeant as ‘absolutely essential, offering not just an insight into Burroughs’ cut-up experiments but also into wider notions of the experimental recordings, sonic art, and sound collage’. Suffice to say, this sound work provides the most suitable audio accompaniment to Burroughs’ cut-up texts.

In consolidating the ‘post-punk Burroughs’, Against Control is an important collection (despite suffering from occasional typos and minor inaccuracies). It should be noted, however, that many of the themes explored within (including flicker and dreamachines, the Master Musicians of Joujouka, and the legend of Hassan i Sabbah) are areas mapped out in detail in Gysin and Wilson’s Here to Go. These intersections with Here to Go highlight the fact that the ideas embraced by post-punk and industrial culture had been pursued by Burroughs in close collaboration with Gysin (and were ideas for which Gysin, ever adept at seductive mythologisation, was frequently the more engaging and dedicated spokesman). Yet, through disseminating Burroughs’ esoteric and enticingly easy-to-enact ideas, Against Control is in the spirit of the post-punk Burroughs (the ‘try-this-at-home Burroughs’) who announced in The Third Mind that ‘Cut-ups are for everyone’. It remains to be seen how successfully academic criticism can come to terms with the arcane figure of the author as detailed within. It may be the case that attempts to incorporate these sides of Burroughs into academia will only misappropriate aspects of Burroughs’ work that are better left outside the groves of academe to be embraced by successive generations of radical adherents.

This site uses Akismet to reduce spam. Learn how your comment data is processed.