Barney Rosset: My Life in Publishing and How I Fought Censorship. Review by Maarten van Gageldonk 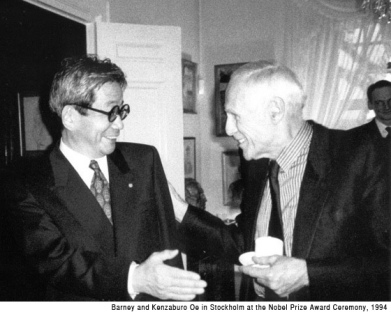 In 2009 and 2010, while doing research for a PhD thesis on Grove Press and Evergreen Review, I had the good fortune to twice interview Barney Rosset. Born in Chicago, Rosset had moved to New York at the end of the 1940s. After that, he never really left. Throughout the 1950s and 1960s, Rosset would build up a publishing empire under the name Grove Press, which at its high point included a multimillion dollar publishing venture, its successful magazine Evergreen Review, but also the publication of playbills, a movie theatre, film distribution, a book club and much more. Then, in a turn of fortune both rapid and unexpected, Grove clashed violently with New York’s radical feminist scene, was immobilized by a unionization attempt and suffered enormous financial losses due to bad real estate investments. By the mid-1970s, Grove was little more than a shell of the company that had existed a decade before and although it limped on as an independent company till its merger with the Atlantic Monthly Press in 1993, it would never again attain the same level of cultural relevance that had characterized it throughout the 1960s. Yet, Grove’s legacy is indisputable, as well as inseparable from Rosset’s own persona, one defined by an ingrained antiauthoritarianism, an immutable belief in the power of writing and an almost pathological inability to plan ahead. Ever impulsive, Rosset’s initial purchase of Grove Press in 1951 had been a spur of the moment decision; for the next decades, he would manage Grove Press in the same vein. Much reviled during its heyday by fellow publishers and moral crusaders alike, Rosset’s reputation has been increasingly vindicated since the turn of the century, as is attested by the number of academic studies devoted to Grove Press and its subsidiaries in recent years, as well as the nigh-universal acclaim that resounded at his death in 2012. The Guardian went as far as to call him ‘the most influential avant-garde publisher of the 20th century’; the New York Times, somewhat more conservatively noted that he had ‘helped change the course of publishing in the United States’.

The Rosset that I met in 2009 was in his mid-eighties, frail of body, but as lively of spirit as ever. Lovingly cared for by his fifth wife Astrid, he still enjoyed his signature drink – a rum and coke – and reminisced at length about Grove’s glory days from an apartment that seemed like a memorial to them, an atmosphere strengthened by the wall-size mural Rosset was working on at the time (now the subject of a documentary film). As we talked, Rosset reiterated some of the stories on Grove Press that have become the stock-in-trade of the various critical histories that have been written about the company over the decades. Rosset also indicated that he was working on an extensive autobiographical work, provisionally called ‘The Subject is Left-Handed’, a line lifted from his FBI file. It was Rosset’s wish that the book be published soon, but, as he also admitted with a smile, he was already on his fifth publisher and not nearly happy with the manuscript yet. As it turned out, the book was not to be during Rosset’s lifetime. Retitled Rosset: My Life in Publishing and How I Fought Censorship it has now been published by OR Books, a small publishing house lovingly run by John Oakes and Colin Robinson.

While Rosset’s disgust for literary censorship returns time and again in the book, from the school paper The Anti-Everything that he produced together with Haskell Wexler to his battles over Lady Chatterley’s Lover, Tropic of Cancer and Naked Lunch, some of his other chapters, in fact, prove to be more illuminating. By now, the story of Grove and censorship has been told so comprehensively by Edward de Grazia, Stanley Gontarski, Loren Glass and others, that Rosset’s own take on events has little to add. The same goes for his relationship to Samuel Beckett and the story of how fledgling publisher Grove Press was able to sign on the future Nobel Prize winner, which has been captivatingly recounted by Grove editor Richard Seaver in The Tender Hour of Twilight (2012). Much more can be gained from reading Rosset’s chapters on his time in China during the Second World War. Rosset’s time in the Signal Corps Photographic Service doesn’t just underscore his love for photography and film, which would later return in Grove’s extensive involvement with film distribution, but also complicates the simplistic image of Rosset as infatuated with communist ideology. While Edgar Snow’s Red Star Over China was close at hand during his time in what Rosset rightfully calls the ‘forgotten theatre’ of the war, Rosset’s memoir also attests to his disillusionment with both the war effort and his personal experiences of China. Intertwined with an adolescent relationship with a Jewish refugee nicknamed ‘Tony,’ Rosset’s depiction of wartime China illustrates his complex connection to the country in his formative years.

Similarly illuminating are Rosset’s chapters on his relationship to Abstract Expressionist painter Joan Mitchell, which in many of Grove’s histories is reduced to a mere footnote. If the war defined Rosset’s complex relation to communism, Mitchell awakened his love for contemporary art, especially for the artists of the New York School. Rosset’s penchant for the work of Jackson Pollock, Willem de Kooning, Franz Kline and others would reverberate in Roy Kuhlman’s book covers for Grove Press, a designer whose work still deserves more thorough academic attention. But for a young and directionless Rosset, Joan also represented ‘an achiever,’ who pushed Rosset to discover his own interests, which would first take him to filmmaking and then to publishing. Despite their many ellipses, Rosset’s reproduction of several of Mitchell’s letters to him provides an interesting insight into a relationship that easily mixes intellectualism with a youthful carelessness: they discuss the work of Käthe Kollwitz and José Clemente Orozco, but she also addresses him as Schmuckie and writes intimately of their sexual relations. While Rosset’s relationship with Mitchell was not to last, they shared an iconoclastic streak, as well as an eclectic intellectualism, both of which Rosset would put to good use in Grove’s catalog.

Rosset’s turn to publishing was partially the result of his inability to become a writer himself and his memoir also suffers somewhat from the use of stilted language, which means that the more well-known parts have often been recounted more convincingly by others. The editing of the book has also obviously suffered somewhat from the long gestation period this memoir was subject to: there is quite a bit of unnecessary repetition and single chapters often shoot off into many different directions at once. For those not well versed in both Grove and Rosset’s histories, the book’s tendency to jump back and forth in chronology may also prove confusing, and there are some curious omissions and understatements. Rosset’s first project after his return from China was a nowadays little-known documentary called Strange Victory (1948), directed by Leo Hurwitz. A two-pronged approach to the notion of victory, the documentary argues that America’s defeat of fascism in Europe was marred by its inability to deal with discrimination against Afro-Americans, in particular in the segregated South. Innovative in its use of juxtaposition to allow the viewers to draw their own conclusions, Strange Victory represents a pivotal moment in Rosset’s career, both by nuancing his views on American postwar society and by foreshadowing his continuing love of the cinema. It is a missed opportunity, then, that Rosset only spends a few lines on the production of the film, the commercial failure of which is as telling about Rosset’s unsuccessful career as a filmmaker, as it is of postwar America’s inability to confront issues of racism, disenfranchisement and segregation.

Yet, these are but small complaints and easily outweighed by Rosset’s zeal for cross-cultural literary discovery and his infinite energy to bring these authors an American readership. No chapter illustrates Rosset’s often long-lasting friendships with many of his authors more effectively than the one devoted to the Japanese writer Kenzaburō Ōe. In Grove’s early years, Rosset had already shown a great interest in Chinese and Japanese literature, for instance reprinting the work of Arthur Waley, one of the foremost orientalists and sinologists. Rosset’s friendship with Donald Keene, who in 1955 edited a small volume of Japanese literature for Grove, set the scene for a durable engagement with various Asian literatures. Through translator John Nathan, Rosset came into contact with Ōe in the early 1960s. While offered more money by other houses, Ōe chose Grove because of his admiration for Kerouac’s Dr. Sax, which Grove had published in 1959. Grove would publish Ōe’s novel A Personal Matter in 1964 and include several of his stories in Evergreen Review. Rosset and Ōe shared a love for Henry Miller and other risqué writers, and their correspondence shows an immediate connection that would last for decades. These letters also make one wish more of this correspondence had been included, as it offers a unique insight into this cross-cultural friendship, the warmth and profundity of which is one of the most endearing parts of this memoir.

Rosset’s life has often been described as a curious amalgam of opposites: a man with communist sympathies who ran a multimillion dollar publishing house; a publisher who really wanted to be a filmmaker; a man lovingly described by many of the women in his life, yet maligned as a sexist during the heyday of Second Wave Feminism. Rosset’s own memoir certainly makes no attempts to reunite these disparate parts of his personality, perhaps only reinforcing them. As a book, it also has its flaws, but for those interested in midcentury American publishing, Rosset’s legacy is indisputable and his memoir adds another piece to the puzzle of a life as impetuous and contradictory as the company he ran.