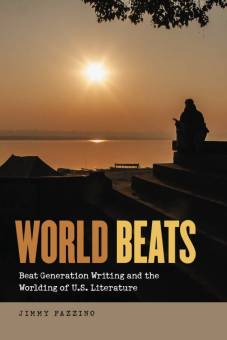 In this age of transnational literary scholarship, a study that explores the theoretical implications of the transnational connections, cross-pollinations and inspirations of the Beat Generation was a lacuna begging to be filled. The Beats, of course, always operated in a transnational literary field. For one, many of them traveled widely, as Bill Morgan has exhaustively chronicled in The Beats Abroad (2016), but they also showed a keen interest in foreign literature and many had mutually rewarding friendships with authors outside of the United States. As Nancy Grace and Jennie Skerl have observed, contrary to the prevalent misconception that while traveling the Beats engaged little with foreign cultures, in fact, authors like William Burroughs, Gary Snyder and Ted Joans made ‘concerted efforts to live as members of the local community.’ What perhaps attests best to the existence of such a thing as a transnational Beat Generation, to borrow Grace and Skerl’s term, is that a small academic industry has sprung up in recent years to explore the writings and ramblings of the Beats outside of the United States. As a consequence, the traditional view of the Beats as being as arch-American as the apple pie and ice cream that fueled Kerouac’s cross-continental itineraries has lost ground fast, to be replaced by a multi-faceted view of the Beats as transnational cultural mediators. The Beats, in this view, were not just a response to the stifling cultural conformity of the American 1950s; they also rebelled against its narrow conception of American identity and the political isolationism of the age by weaving a comprehensive network of transnational connections and in the process enriched American literature.

Jimmy Fazzino’s World Beats: Beat Generation Writing and the Worlding of U.S. Literature (2016) presents a series of case studies that explore the transnational implications of the Beats through the life and work of better-known, as well as lesser-known, Beat Generation writers. It also posits a convincing argument for a continuation of the Beat aesthetic in the here and now by discussing works that the author considers to be ‘post-Beat.’ Fazzino’s point of departure is the notion of ‘worlding’, a concept originally introduced by Martin Heidegger in 1927 (German: welten). While Heidegger’s use of this neologism was mostly intended to signify the ongoing and pluriform processes by which we engage with the world around us, processes that cannot be reduced to their outcomes, Fazzino uses the term to argue that the Beats need to be seen as authors in constant engagement with the contemporaneous literary world at large and thus not as delimited by the American experience only. As Fazzino writes, works like Kaddish, Mexico City Blues and Naked Lunch in fact suggest that their authors’ ‘calling as writers was somehow predicated on their leaving the United States behind.’

The kind of theoretical discourse that Fazzino locates World Beats in requires a reading of Beat writing as deeply entrenched in world literature, an argument that also highlights the worlding effect that the Beats as a movement had on American literature in the 1950s and 1960s: their interest in the literatures of nations geographically and culturally distanced from America punctured American cultural isolationism and set the stage for a more widely shared interest in world culture among American youths in the 1960s. For Fazzino, a worlded reading of the Beats also encompasses a focus on the liminality of the Beats as a movement: caught in between the all-American experience and the urge to explore abroad, between 1950s moral codes and their impulse to experiment with alternative styles of living, between the staleness of a literary field dominated by the New Critics and the drive to reinvent what it meant to be an author, the Beat revolution was necessarily a partial one, and hence a sense of in-betweenness pervades their writings. For the Beats, moreover, the urge to transgress textually was intricately linked to their geographic transgressions, Fazzino argues, an observation that in itself already presents a worlded view on literary production.

The authors examined in this volume vary between the more obvious choices in any consideration of the Beats in a transnational context – Jack Kerouac, William S. Burroughs – and those often discussed outside of the American context, like Philip Lamantia and Amiri Baraka. A solid study of Kerouac’s poetics, an author who for many years oscillated between his Canadian roots and his fascination with Mexico, leads Fazzino to analyze Kerouac’s depiction of subterranean America, a parallel society of bums and outlaws that by the virtue of their nomadic existence do not abide by geographic boundaries. For Fazzino, Kerouac’s depiction of America as what John Rechy would later describe as ‘one vast City of Night stretching gaudily from Times Square to Hollywood Boulevard,’ presents a rhizomatic alternative to the Age of Conformity. By uncovering the rootedness of Kerouac’s works in a transnational network, Fazzino illustrates how essential these connections were for the gestation of some of Kerouac’s most beloved works.

While Kerouac’s links across North America make his inclusion near unavoidable in this book – much like Ginsberg’s, who is conspicuously absent – Fazzino’s worlded readings of Amiri Baraka and Philip Lamantia’s works breaks new ground. Much like Kerouac, Baraka is traditionally contextualized by his increased involvement with black radicalism and black cultural nationalism in the 1960s. Yet, while one view holds that Baraka’s increased association with these movements entailed a decreased affiliation with the Beats, Fazzino convincingly argues against this binary reading, observing that Baraka’s work after the adoption of his African name constituted more of an ‘evolution’ that welded a Beat sensibility to his black nationalist political views. Equally enlightening is the discussion of the Six Gallery reading in the chapter on Philip Lamantia. Here Fazzino questions the conventional narrative that posits this reading as an unofficial kickoff for the Beats’ rise to wider recognition. As has been observed by various authors, with the benefit of hindsight, the Six Gallery event can but stand as a distorted representation of the Beats as a movement, for one because only poetry was recited that night. Much like early Beat publications, such as Evergreen Review’s San Francisco Scene issue (1957) that built directly on the Six Gallery reading, the reading itself is an example of cultural complexity, since its participants came from very different backgrounds and only shared a poetics in the loosest sense of the word.

In the second part of World Beats, Fazzino turns first to two authors whose transnational writing processes have been subject to much discussion before: William S. Burroughs and Brion Gysin. Burroughs’ life as el hombre invisible in Tangier’s International Zone, for instance, certainly did not entail a disinterest in the city by the author himself. In fact, its labyrinthine Medina can be read as a convincing metaphor for the mazelike storyworld of a book like Naked Lunch. Yet, as Fazzino argues, an author like Burroughs had a ‘global imagination,’ which requires a reading of his work that breaks free from relying only on its Moroccan conception in the mid-1950s, for instance by acknowledging the debt of Burroughs’ South American travels earlier in the decade, which resulted in The Yage Letters (1963). Burroughs’ fellow Americans in Tangier, Paul and Jane Bowles, make only marginal appearances in this book, perhaps because traditionally their work has only marginally been considered to be part of the Beat canon, something that could certainly be disputed for a novel like The Sheltering Sky. Instead, Fazzino focusses on Brion Gysin’s much-reviled 1969 novel The Process (the Times Literary Supplement called it ‘tedious,’ Kirkus Reviews felt it was soporific), which much like Paul Bowles’s novel centers on an extended trip into the Sahara. While both Gysin and Bowles depicted North Africa and its inhabitants in undeniably Orientalist tones, Fazzino also stresses its polyvalence that allows the voice of the Other to be heard in Gysin’s work. Indeed, while Bowles would always stoically resist integration, forever remaining the American in Morocco, Gysin dressed in local clothing and forged long-lasting relationships with the city’s inhabitants. As Fazzino shows, these divergent approaches are reflected in the authors’ respective novels: Bowles’ semi-autobiographical novels like The Sheltering Sky and Let It Come Down always retain the sociologist’s critical distance, while Gysin’s protagonist engages with local culture with complete abandon.

Fazzino concludes his book with some speculations on the Beat legacy, arguing in favor of a connection to what he considers post-Beat authors in the here and now. While acknowledging that any discussion of heritage is necessarily a difficult one, he proposes that authors like Juliana Spahr, Anne Waldman and Xavier Huerta have taken up the Beat torch. Yet, for Fazzino it is mostly Maxine Hong Kingston who qualifies for the label post-Beat, if only on the basis of the novel Tripmaster Monkey (1990), a revisionary act of writing back against the Beats that questions their problematic dealings with race and gender, but from a distinctly Chinese-American perspective. Whether one work qualifies an author as post-Beat remains questionable, of course – Kingston’s most well-known work The Woman Warrior (1975) contains no trace of the Beat legacy, perhaps at the time still too fresh to be seriously addressed. At the same time, one wonders whether the many autobiographical works of the women of the Beat Generation that have appeared since the movement’s heyday would not merit inclusion here as well. Much like Kingston, Carolyn Cassady, Joyce Johnson and others have also written back to the Beat Generation, at the same time criticizing and immortalizing it. As such, they would deserve a place in this chapter.

One minor criticism to raise here is that while the case study approach of course inevitably comes with a fragmentary structure, this book does suffer from some unnecessary repetition and a slight unevenness in register here and there. Yet, these are but minor quibbles: in a period in which the Beats have received so much attention in popular culture recently, this thoroughly scholarly approach is a welcome addition to the growing body of scholarship that attests to the fact that as a movement the Beats shaped a world of their own.